Take Shelter - The Dawn of A Dark Age 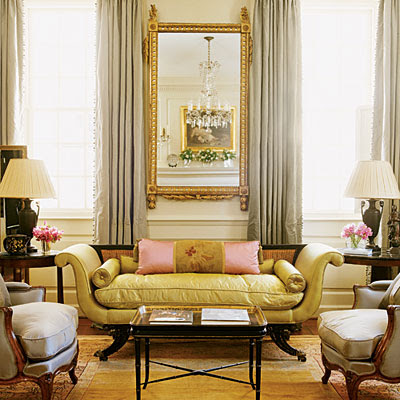 from Southern Accents, designer Amelia Handegan
If you read shelter magazines, you probably have noticed they seem to be about to enter a Dark Age.  Mostly blamed by the economy or the blogosphere, one by one, each of the more niche magazines has had to close its doors. The greatest loss for me was Southern Accents, a most fabulous publication depicting gorgeous interiors, imbued with color, comfort and charm.  Accolades I would love to attach to my own home.

Now we are left with only a handful of magazines to entertain and educate the small percentage of the market still interested in such publications:  Veranda, House Beautiful, Architectural Digest, Luxe.  AD and Luxe are not my preferred resources.  Both publications offer aesthetically pleasing homes, with a modern, sophisticated vibe, which in my book translates as cold and unwelcoming.   House Beautiful, I think, is trying to capture the Southern Accents audience, definitly offering color and warmth like no other current shelter magazine in the stands, and nary a santos in the mix. I only started looking at it a few months back, and they have not disapointed. 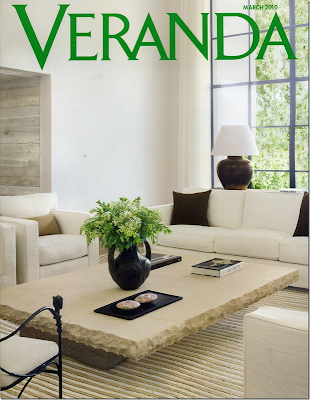 picture from CotedeTexas
To the big one: Veranda! It has a following for sure, even though the parent company, Hearst Corporation, chooses not to disclose their online readership demographics unless you have some sort of approval (which they graciously provided upon my request).  I have subscribed to Veranda for many many years. But, let me just tell you, that this last issue cover alone made me want to dunk the offending thing straight into the recycle bin.  There were a couple of very small saving graces...  Dan Carithers design of a lodge inspired home in Georgia was somewhat warm and welcoming, albeit a little "dated".  Kay O'Toole's Houston home had a beautifully styled bookcase, but what was left over were perching birds, a teetering wall nest, and beans hotglued to a dinner plate.  The cover story, about a Rough Luxe style, modern home in California sent chills up my spine.  Maybe all the money they spent on the Axel Vervoordt  pieces kept them from acquiring some art and other niceties.

I have to do a sidebar here /  I just wish people would get over the Axel Vervoordt inspired look of bare necessities.  PEOPLE, it works for him at his little lodge in the Swiss Alps, but I don't want to sit my Channel-knockoff clad derriere in your rough wood furniture at your next soiree.  The Belgian look is soooo depressing, it must be used gingerly or scattered with more lush furnishings and trims, otherwise it is just painfully gray.

Here is another thing about Veranda, it's editor, Lisa Newson, is the mother of Wisteria owner, Andrew Newson.  He is married to the daughter of Jane Moore, one of the more established designers in Houston.  This explains two of the main icky feelings I have associated to this magazine:  There is ALWAYS a Wisteria piece in at least one of the stories, and don't you just hate the feeling that you are trying to be sold on something?  And two, Veranda has an unhealthy, one note feel to it, which can only be attributed to their preferrence to Houston or Dallas based designers.  No diversity, to me, means boredom.

I absolutely don't want Wisteria Veranda to go supernova and disapear.  I just wish that they would bridge the gap left over by the other wonderful magazines that went defunct in the past two years.  They have attempted to showcase different styles in this last issue, but I think it fell flat.  There was not a ONE thing I could relate to, and after reviewing their target audience data, I should, with the exception of having a young child,  pretty much be a poster child for their readers profile.

Now that I have alienated half of you, my dear readers...I am saddened to say that the shelter magazine industry seems to be going in the way of our space program... fizzleing out into darkness.
Posted by The Shiny Pebble at 8:26 AM

I must admit that I absolutely love Veranda (not to mention House Beautiful). It really doesn't matter that many of the homes featured are the work of Texas designers. Good design is good design regardless of its source. I'm just thrilled that there are a few North American shelter magazines still publishing. I'm heartbroken about Southern Accents. It was my favourite shelter magazine (and I'm Canadian)!

I do agree with you about the Belgian look, though. While there are some elements of it that I like, for the most part I'm not interested in it. It's too gloomy. And it does not mix well with other styles. In other words, if you plan on embracing the Belgian look, you pretty well have to throw out everything you own and start all over again.

Hi Squeak, thanks so much for commenting. I appreciate your point of view and understand that Canada has very talented designers. My opinion is based mostly on all of the HGTV programs featuring Canadian talent. There is a sophistication about Canadian design that I truly admire.

You are right....Veranda does feature many Texas homes. One reason is that Veranda used to be a Southern magazine, therefore, Texas was one of their biggest states to pull editorial from. Plus Texas has some great designers! Veranda was founded and owned by Lisa Newsom until it sold to Hearst in 2002. Not only did Lisa Newsom start Veranda on a shoe string with no corporate backing, she was also the co-founder of one of your favorite magazines, Southern Accents! We are all sad to see that go! I think we should support the shelter magazines that are left standing. All magazines are showing less editorial because they lack the ads to pay for additional pages. Most of them do a pretty good job of including something for everyone. I wouldn't feel too bad about the Wisteria coverage in Veranda. I see a lot more credits for Wisteria in House Beautiful, Country Living, Better Homes and Garden and Elle Decor.

Dear anonymous 9:12
Thanks for the enlightening backgroud info on Veranda's history. I truly appreciate your comments. I feel a need to explain myself. This is not a design blog. It is more of a consumer information forum geared towards busy moms. My opinion is based as such. As a consumer, who does not have an official designer background, I was not happy with THIS PARTICULAR edition. As a subscriber, representing a sizeable portion of their market share, (that is those readers that are not in the industry), I am in the opinion that their selections for THIS issue did not live up to MY expectations. I am not critisizing the talented TX designers (heck I am not qualified to do that), but I am in the opinion that Veranda's choice to continuously showcase a handful of TX designers have made the magazine "predictable". Furthermore, I don't feel a need to support the magazine. Hail Capitalism!!! I want someone, Hearst or someone else, to step up to the plate and produce a publication I will want to spend my money on. I am humbled by you all's interest and the time you have taken to educate me and my audience futher. Thanks! :)

OH MY GOSH!! I SOOOO agree with everything you said. I happen to love the "Texas" look (Cote de Texas being a fave of mine), but it truly doesn't translate or "travel" to some other regions nearly as well. I adored Southern Accents just as I adored the "old" Country Living and Veranda and numerous others that are no longer available. I am a decorator and I have to tell you that when clients hand me inspiration pictures, I'm always amazed at how many of them are from older publications- they've been saved and carried and loved for several years- and they're STILL what todays' client wants. Fascinating
xoxo Pattie

The Shiny Pebble
A mom, children's party stylist, illustrator and stationery designer, who does most of the buying in this household, and who thinks businesses should be hearing what I have to say, already!

Do Not Miss These:

What I have written:

"I know not how I may seem to others, but to myself I am but a small child wandering upon the vast shores of knowledge, every now and then finding a small bright pebble to content myself with."